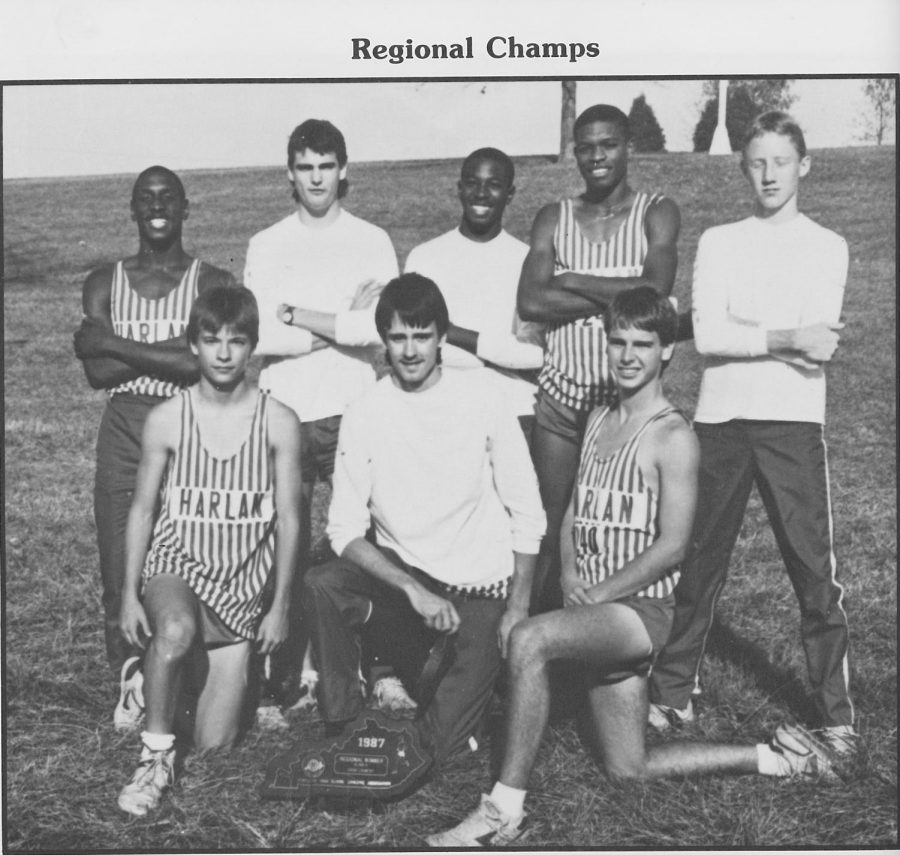 From non-existent to a state contender over a four-year period, the Harlan High School cross country program enjoyed an amazing run in the mid 1980s under the leadership of coach Leo Miller, with three regional championships and a third-place finish in the Class A state competition.

“Harlan had a long history of success going back to 1963 in track. After running for Doc (Gray) and designing the “Run for the Hills” Poke Sallet race, I asked Principal Bob Morris if I could start a boys cross country team,” Miller said. “He said yes, as long as I coached the girls also. I transported both teams in my van until the girls left for coach Debbie Brown’s “open gym.” I told Mr. Morris that I would never coach girls again.”
Miller said the experience proved to be a lot of fun and provided great satisfaction.
“Eight straight Saturdays for four straight years I drove that van all over Kentucky with a van load of boys while teaching English grammar. Winning is fun and we had a lot of fun. By the time those boys were seniors, they did not lose to a Class A school all season. They won the Covington Catholic Invitational including schools from Ohio, Indiana, and Bishop Brossart, the two-time Class A state champion,” he said. “The results speak for themselves, but the memories have carried on throughout my life. Most all of my athletes come back to me to tell me that I had so much faith in them during running and beyond. Many say how I taught them that there wasn’t anything that they couldn’t do. Many say, when it gets hard, I go back to xoach Miller to see what he would say.”
Another constant on those first four teams was Miller’s son, Will, now a physician assistant at the Cloverfork Clinic who has remained involved in the program with two sons running. He recently reflected back on the early years of the program and the success the program enjoyed.
———
The 1984 team: Jerry Lively, Jackie “June” Robinson, Gregor Jahn, John Mink and Will Miller
Lively had not participated in any previous organized sport. Not until his senior year could he claim to be the best at something. He was the first to compete at state.
June Robinson was Billy Hicks’ starting guard, but he couldn’t tell Leo Miller no when he asked him to run. Miller had tended to Robinson after a broken jaw in a basketball game against Evarts. He was our first A-list star athlete who gave credibility to this new sport and paved the way for the basketball players who followed.
Gregor was a tall German exchange student who couldn’t dunk, but he could run and “high jump.” This led to a friendly rivalry with June on the track.
Mink and I were the constants for coach Miller’s four-year run. The team’s season ended at region when Mink placed DNF (did not finish). He got into a fast pace out front and ended up on the ground. He would pick himself up and go on to set four school records, solidifying himself as Harlan’s best distance runner ever.
———
The 1985 team: Fred Fluker, John Mink, Will Miller, Jimmy Thomas, Mike Pace and Paul Douglas
Fred and Jimmy, two more of coach Hicks’ players, joined the team as seniors. Fred led the team to our first regional title, but we wouldn’t have won without Jimmy. Fred went on to an undefeated track season until state where he placed third, the highest finish in the mile in school history.
———
The 1986 team: John Mink, Will Miller, Marc Estep, Rodger Simms, Jimmy Thomas (300 hurdle school record holder), Mike Pace and Paul Douglas
Estep and Rodger, two exceptional athletes, joined the team. Estep had moved from Florida and Rodger came from the basketball program. Mink and I finished second and third in our second regional championship. Estep went on to win the state 800 meters the following year, setting the school record.
———
The 1987 team: John Mink, Marc Estep, Stephen Underwood, Rodger Simms, Will Miller, Mike Pace and Edell Gray Jr. (110-hurdle school record holder
Underwood, a track star/400 meter school record holder, left the sidelines of the football field as a cheerleader to join the team. Remember, I finished third in the region the year before and went on to run at Centre where I was all-conference, but I was only the fifth best runner on this team. We won our third regional championship and finished third at state.
———
After the 1987 season, the program lost four seniors to graduation and Rodger to Bobby Keith’s Clay County Tigers, who won another 13th Region basketball tournament. Legendary Hall of Fame track coach Doc Gray took over the cross country program and had success with Philip Hamm.
Current superintendent C.D. Morton filled in until Brian Jones coached the girls to a regional championship, their only one in school history. Miller returned in 2012 and took Andrew Mills, relative of Jerry Lively, to state his eighth-grade year. He also trained Laura Pace, daughter of Mike Pace. She was the only girl he ever coached and she too made state that year. He went on to coach four more years but never with a full team. He ended his cross country coaching career with his grandson, Mason Miller, who won the school’s only individual regional championship.
Connor Sakati, from Teach for America, coached the last two seasons and led the girls back to the state meet last year before resigning. Harlan’s boys cross country has yet to win another regional championship since winning three straight from 1985 to 1987.