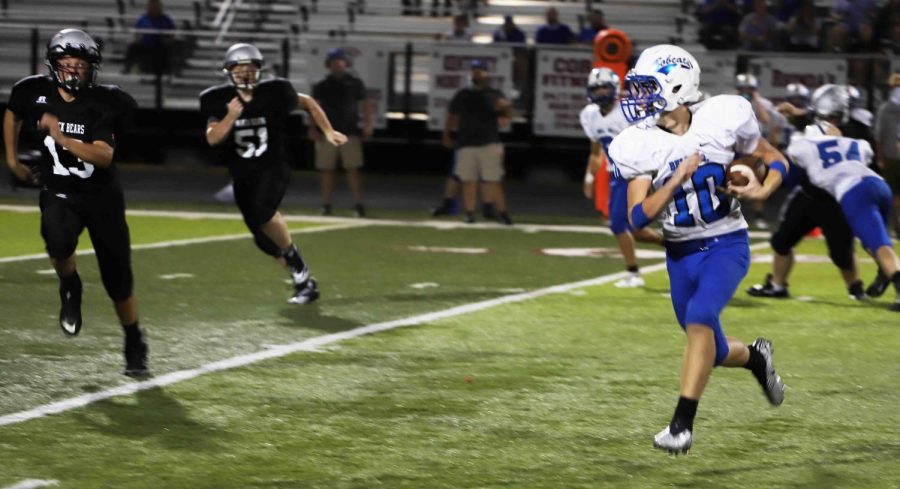 A balanced Bell County offense spoiled the home opener for the first Harlan County middle school team on Thursday as the Bobcats claimed a 30-20 win in seventh- and eighth-grade football action.
“We played a good Bell team and came away a little short. We are improving each week and the coaches are learning more about our players each day,” said Harlan County coach Scott Caldwell. “Our goal is to improve each week and have an eighth-grade group ready for high school. We will go back to work Monday and keep trying to improve.”
Bell scored first when Gauge Bauer broke free on a fourth-and-three play and went 42 yards for a touchdown. Jackson Walters added the two-point conversion.
Jason Fultz answered for the Bears when he broke free for a 36-yarrd touchdown with 3:07 left in the first quarter. James Ryan Howard added the tying two-point conversion.
Bell scored again late in the period to go ahead 14-8.
The Bobcats drove into Harlan County territory again late in the half on runs by Bauer, Walters and Noah Brock, but the Bears held when Shemarr Carr and Dustin Jones combined for a stop on fourth down.
A 14-yard touchdown run by Brock on the first play of the fourth quarter extended the Bell lead to 14-8 after Peyton Burnett teamed with Cameron Hall for the two-point conversion.
Dakota Keith picked up a pair of first downs as the Bears drove into Bell territory. Luke Kelly went the final 6 yards with 4:17 left to cut the deficit to 22-14.
Walters took a pitch from Burnett and went 42 yards for a touchdown to put the game away for the Bobcats. Burnett teamed with Cooper Miracle for a two-point conversion.
Kelly reached the end zone again with 48 seconds left when he raced 52 yards for a touchdown.
The Bears opened their schedule with a 30-0 loss Saturday at Belfry. The game was tied 0-0 at halftime.
Harlan County returns to action Tuesday at home against Clay County.
———
Cole Cornett and Brayden Morris each ran for touchdowns as New Harlan opened its fifth- and sixth-grade schedule with a 16-14 win over Bell County.
The Bears began the game with a seven-play, 45-yard drive that featured runs by Landon Brock and Colton Delaney. Cole Cornett took a pitch from Brock went went 22 yards around left end for a touchdown. Brock threw to Colby Shepherd for the two-point conversion as the Patriots led 8-0 with 2:41 left in the first quarter.
Bell pulled even as Kaleb Cornett ran 39 yards for a touchdown with 4:24 left. The Bobcats added the two-point conversion.
New Harlan ran out the entire third quarter with a 10-play, 55-yard drive that featured two first-down runs by Delaney and one by Cornett. Morris went the final 6 yards for a touchdown on the last play of the period. Shepherd added the two-point conversion.
Bell cut the deficit to two with a 67-yard run on the opening play in the fourth quarter. The Patriots held on the two-point conversion and kept the lead.
A long kickoff return by Morris gave the Patriots good field position and they ran out all but the final 13 seconds before the drive stalled on the Bell 14.
The Bobcats fumbled while trying a reverse and Delaney recovered. The Patriots took a knee to end the game.
Delaney ran for 62 yards on eight carries, while Morris added 59 yards on 10 carries. Cornett had 50 yards on seven carrie and Brock added 20 yards on seven carries.
Morris led the New Harlan defense with six tackles. Delaney had four tackles. Tyler Coots, Hunter Moors and Bryson Bryant added three each.
———
Bradon Middleton scored four touchdowns as Evarts defeated visiting Cumberland 30-6 in fifth- and sixth-grade football action Thursday.
Middleton had two touchdowns in the first quarter as Evarts took a 16-0 lead with the help of two-point conversions by Gunnar Middleton and Braxton Anglian.
The lead grew to 22-0 at halftime as Bradon Middleton reached the end zone for a third time.
Hayden Grace put Cumberland on the board with a touchdown in the third quarter.
Bradon Middleton added another touchdown later in the third quarter. Gunnar Middleton added the two-point conversion.
Evarts travels to Fleming-Neon on Thursday. Cumberland plays at New Harlan on Thursday.
———
Bell County’s seventh- and eighth-grade team defeated Clay County 8-6 to open its season on Sept. 12 and won 24-8 on Sept. 15 at Cumberland Gap, Tenn.
With Clay up 6-0, Noah Brock tied the game with a touchdown run early in the fourth quarter. Blake Burnett threw to Holden Clark for the winning two-point conversion.
The Bell defense had several fourth-down stops, including one in the closing minutes to seal the win.
Gauge Bauer and Caleb Miller each had touchdown runs for Bell in the first half. Jackson Walters and Miller each ran for two-point conversions to put the Bobcats up 16-8 at halftime. Brock scored in the second half, then Burnett threw to Hagen Neal for a two-point conversion.
Burnett had a late interception to close the game.