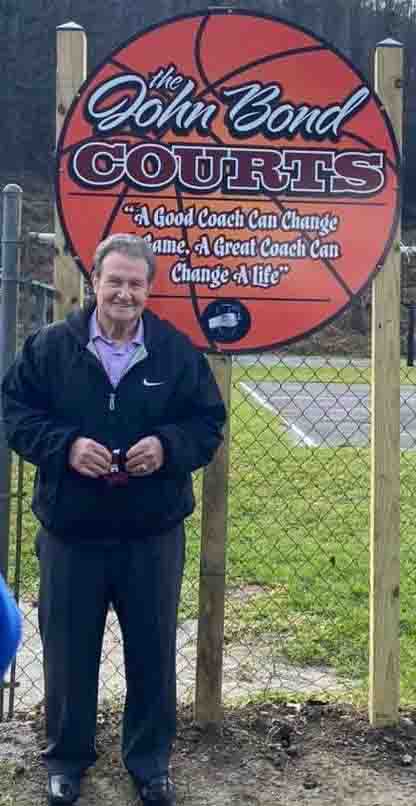 Former Cumberland girls basketball coach John Bond was honored Saturday when the basketball courts at the Walter Dick Park in Benham were named in his honor.

Growing up in his beloved Benham, John Bond could usually be found playing basketball or baseball with his childhood friends.
He carried that love for sports into his playing career at Benham High School, where he was a member of the school’s last graduating class of 1961. After graduating from the University of Kentucky, Bond returned home to begin a long and successful career as a coach at Cumberland High School.
His impact on the lives of his players and students through the years continues today as a Gear Up teacher at Harlan County High School, as well as Cumberland and James A. Cawood elementary schools. He was honored Saturday by many of his former students as the courts at Walter Dick Park in Benham were named in honor of Bond.
“I am at a loss for words and truly humbled by such an honor. It speaks unlimited volumes for the players, parents, my assistant coaches, my support staff, my mother’s club boosters club leaders and mothers whose loyalty, unconditional support of our Lady Skins program was instrumental to the long term success we enjoyed,” said Bond in a statement on the honor. “I never scored, defended nor rebounded, but was blessed by God to have not only talented players but wonderful young ladies who bought into TEAM and UNITY and compiled the record I was blessed to be a part of. I want to thank all of the people who were at the event for such an honor. A special thanks to those who organized this (and I know who you are ), to the caterers of the delicious food and to the one who baked a delicious cake. I will never forget you, all of you, not the date November 14, 2020. All praise and glory and honor to our Lord Jesus Christ. Thank all of you from my heart and long live the Lady Skins.”
“I just can’t think of a better person to recognize because of everything he has accomplished on and off the court. To me he is the greatest coach, mentor and friend,” said Betty Morris Russell, a former player and assistant coach under Bond who helped organize the dedication at the park.
Bond turned Cumberland into a small school mountain powerhouse throughout the 1980s and 1990s, leading the Lady Skins to a pair of state tournament appearances in the 1980s and the first two All “A” Classic state titles in the early 1990s while producing numerous college players who went on to successful careers in their field of choice. His overall record was 492-248, second only to Clay County coach Donnie Gray in victories in 13th Region history.
Bond inherited a program that had won only game in the first year of girls basketball in Kentucky in the fall of 1976 and led a steady improvement from three wins in his first year to 10 the next year, then 12 and then 21 in 1979. By 1981, Cumberland ended Cawood’s run of five straight 52nd District titles. Cumberland made its first trip to the Sweet Sixteen in 1984 in Richmond and returned two years later in Bowling Green, becoming the first Harlan County team to win a game in the state tournament by knocking off Miss Basketball Kris Miller and Owensboro Catholic.
Led by all-staters Joey Morris and Lori Kluck, Cumberland won the first two Kentucky All “A” Classic state tournaments in 1991 and 1992 and reeled off six straight 52nd District titles. Cumberland remained a factor in the 13th Region until the school closed in 2008, along with Cawood and Evarts to form Harlan County High School.
Bond was proud to be honored at the park bearing the name of his former teacher and coach. Dick helped Bond for many years at Cumberland as he was a scorekeeper and statistician.
“What an honor to be mentioned in the same breath as Walter Dick, who is the definition of teacher, mentor, avid supporter of mine and all the many kids he taught through the years,” Bond said. “He was always there for support and advice. He was a great teacher but even greater as a person.”