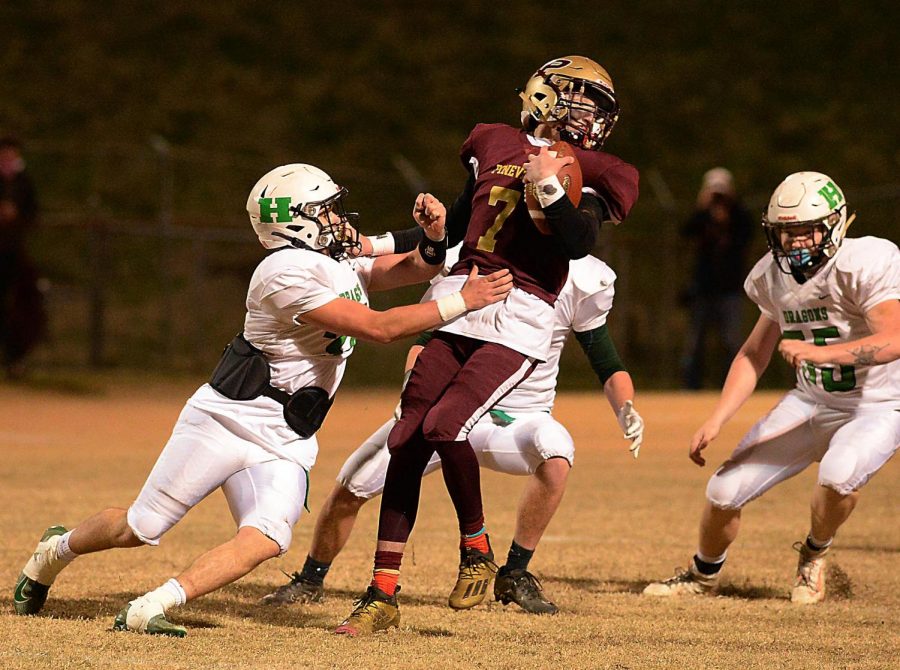 Several Green Dragons brought down Pineville quarterback Reese Capps in first-round playoff action Friday. The Harlan defense had a safety and scored a touchdown off a fumble in the first half to build a 14-7 lead. The Lions rallied for a 21-14 victory.

PINEVILLE — Down by seven at halftime Friday, the Pineville Mountain Lions were in danger of a second straight first-round playoff loss at home with their top running back and starting quarterback both sidelined by injuries and the visiting Harlan Green Dragons riding the momentum following a strong first half led by quarterback Cade Middleton.
The Pineville defense responded by shutting out the Dragons in the second half on the way to a 21-14 victory that propelled the Lions to a District 8 championship game next Friday at Williamsburg.
“I thought our defense played well the entire game,” Pineville coach Randy Frazier said. “We had a lot of our key players on offense injured, but our defense stepped up. Our defense was put in a tough position with turnovers but turned it around for us in the second half.”
Pineville limited Harlan (3-3) to only 10 yards on the ground, but had a hard time controlling Middleton, the junior quarterback who was making his first start of the season after sitting out a year following his transfer from Harlan County. Middleton completed 19 of 43 passes for 217 yards, finding five different receivers with a spread offense that featured four- and five-receiver sets. Jayden Ward and Darius Akal each had five receptions while Jeremiah Mills and Evan Browning added four each.
“Cade makes us three touchdowns better, just by his presence,” Harlan coach Eric Perry said. “We knew we were going to throw the ball a lot tonight since they are so much bigger than us up front, but I don’t know if I expected us to throw it that much.”
“We knew they had a quarterback who could throw it. We knew he could play,” Frazier said. “Like I’ve said before, coach Perry has turned that program around. I think he’s the coach of the year, no matter what some other teams do.”
The Lions, who improved to 5-2, played the entire game without running back Devon Morris and most of the final three quarters without quarterback Reese Capps, who had to be helped off the field with an ankle injury. Freshman quarterback Clay Teague and junior tailback Atavius Flannery took over the offense in the second half.
Flannery went in from the 4 with 5:32 left in the third quarter to pull the Lions within one after Timmy Hall returned a shanked punt to the Harlan 9. The Lions’ two-point conversion attempt failed.
Pineville’s defense forced another punt and the Lions went on a 13-play, 48-yard march that featured 10 straight runs by Flannery, including a 1-yard TD run with 7:24 left. Flannery added the two-point conversion.
“We basically ran only three plays in the second half with so many people in new positions,” Frazier said. “Coach (Jason) Chappell drew up one play in the dirt over there.”
Harlan had two chances in the closing minutes to drive for the tying, or winning, score. Middleton completed a 27-yard pass to Akal and a 20-yard pass to Ward for a first down on the 22 in the final minute, but a pass into the end zone on fourth down fell incomplete with six seconds remaining.
Pineville took the early lead with a 3-yard TD run by fullback Trevor Kidd with 1:34 left in the opening quarter. Capps had a 37-yard run to help set up the score. Luke Naylor hit the extra point.
A long punt by Ethan Clem backed the Lions up to their own 10 and Harlan scored two plays later when Jonathan Lewis fell on a fumble in the end zone. Middleton was stopped on the two-point conversion.
Another long Clem punt gave Pineville the ball on the 10, but the Dragons needed only one play to score this time as Teague was brought down in the end zone for a safety and an 8-7 lead.
Middleton directed another scoring drive after the free kick, connecting with Mills twice before finding Browning on a fourth-and-three play for a 7-yard touchdown with six seconds to play in the half. The extra point attempt was blocked.
“We thought they got a little fatigued in the second and fourth quarters when we played them the last time, and that was our plan. That is why we went with the hurry up,” Perry said. “They eventually wore us down up front. Our kids kept battling though. This is tough to swallow. We just came up short.”
———
Pineville 21, Harlan 14
Harlan. 0 14 0 0 — 14
Pineville. 7 0 6 8 — 21
P — Kidd 3 run (Naylor kick)
H — Lewis recovers fumble in end zone (run failed)
H — Mills and Akal tackle Teague in end zone for safety
H — Browning 7 pass from Middleton (kick blocked)
P — Flannery 4 run (run failed)
P — Flannery 1 run (Flannery run)