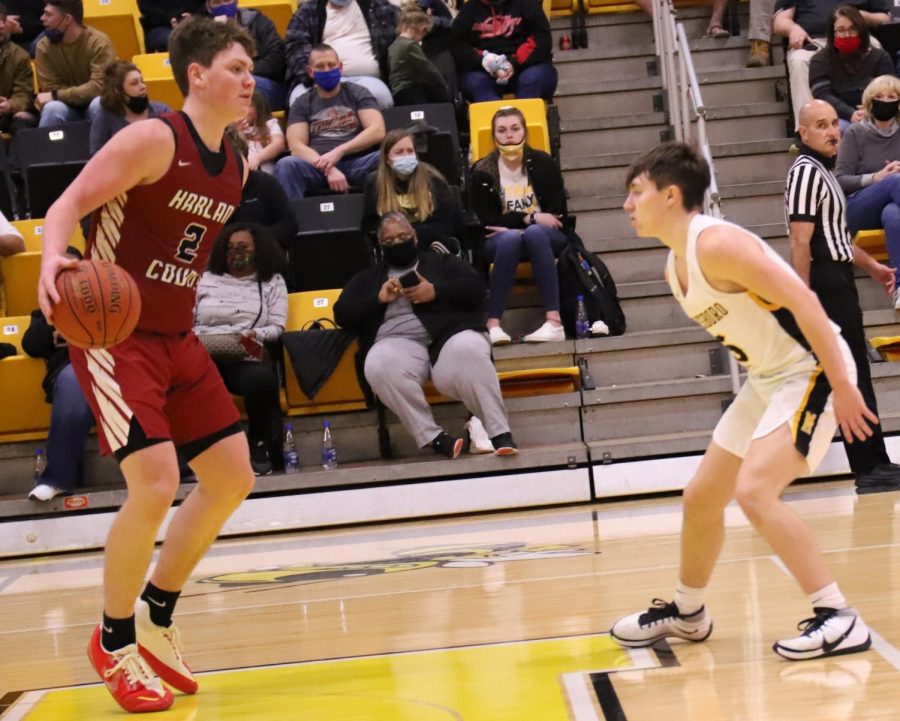 Trent Noah set up the Harlan County offense in Tuesday's district clash at Middlesboro. Noah had 16 points and 13 rebounds as the Black Bears won 67-39.

MIDDLESBORO — Lewis Morris, the veteran Middlesboro coach, has watched plenty of sharp-shooters in his playing and coaching career and was impressed by what he saw Tuesday from the Harlan County Black Bears.
Harlan County shot 57 percent (13 of 23) from behind the 3-point line and 58 percent (26 of 45) overall in a 67-39 rout of Morris’ Jackets in improving to 6-0 overall and 2-0 in district action.
“They shot the ball really well. They were hitting shots at every position. They have a good ballclub. It doesn’t look like they’ve had any breaks,” said Morris with a laugh. “Harlan County will be hard to beat shooting like that. I know they were open a lot, but you still have to make them.”
“We shot it well and have the capabilities to do that,” Harlan County coach Michael Jones said. “I was disappointed in the way we defended and rebounded, especially the first half. We have to get more rebounds out of our guards. We also have to do a better job of pressuring the ball.”
Freshman guard Trent Noah scored 16 points and grabbed 13 rebounds to lead the Bears in both categories. Senior guard Tyler Cole continued his hot start with 15 points on six-of-six shooting. Eighth-grader Maddox Huff came off the bench to provide a spark once again with 14 points, including four of eight from behind the line.
Cayden Grigsby scored 14 and Bryson Barnard added 11 for the Jackets. Middlesboro is off to a 2-3 start, not a surprise for a team that lost four starters from last year’s 20-win team.
“We just have to compete. I hope by the end of the year we’ll get better,” Morris said. “We’re just having a hard time scoring the ball. We’re playing a lot of freshmen and even some older kids who haven’t played a lot before. We’ll get better as we continue.”
Harlan County hit seven of 10 shots in the opening quarter, including 3-pointers by Noah, Jackson Huff, Daniel Carmical, Cole and Maddox Huff, in building a 19-9 lead.
The Bears connected on seven of 11 in the second period, including back-to-back treys by Cole and Carmical for a 16-point advantage. Maddox Huff closed the half with consecutive 3s for a 29-9 halftime lead. HCHS hit nine of 13 from behind the line in the half.
Noah found success penetrating in the third quarter, hitting four of five shots, as the Bears were more aggressive on both ends. Middlesboro had only one turnovers in the first half but turned it over three times in the third quarter as the Bears’ lead grew to 58-31.
The Bears’ lead reached 31 on a basket by Jonah Swanner midway through the fourth quarter. Grigsby, a freshman, had a pair of 3s for Middlesboro in the quarter.
Harlan County will travel to West Jessamine, the defending 12th Region champions, on Friday and will play Scott on Saturday in Covington in a rematch of a first-round game from the 2017 state tournament. Middlesboro travels to Bell County for a district doubleheader on Friday.