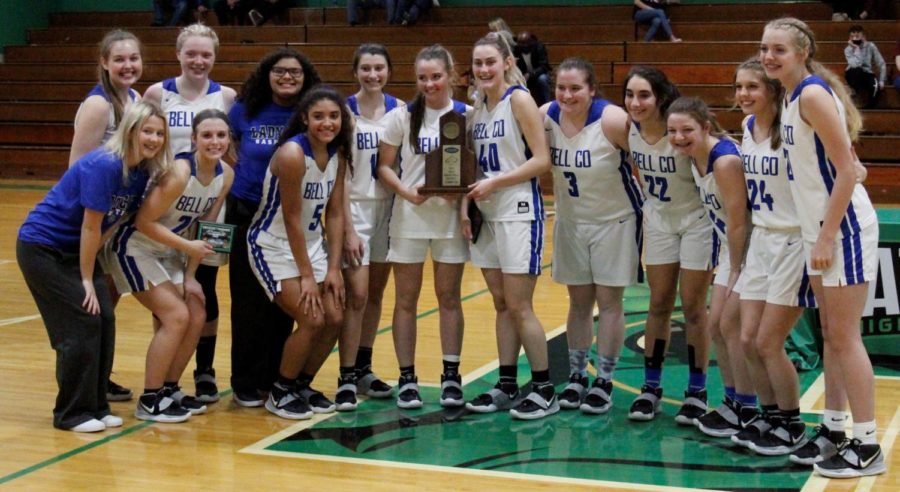 The Bell County Lady Cats are pictured with their district championship trophy after defeating Harlan County 62-55 on Thursday.

Undefeated and unchallenged against 52nd District competition through the regular season, winning five games by an average of just over 30 points, the Bell County Lady Cats found themselves in a battle Thursday against Harlan County in the district tournament finals at Harlan High School.
Locked in a 38-all tie through three quarters, the Lady Cats hit seven of eight shots in the final period and opened with a 16-2 run on the way to a 62-55 victory for their second straight district championship
“I thought our pressure got better at that point, and sometimes you start making shots when you play well on defense and get that energy,” Bell County coach David Teague. “I thought we played really well the fourth quarter.”
Bell freshman point guard Nadine Johnson hit eight of eight shots from the field on the way to earning tournament most valuable player honors with 17 points.
“She makes us go, and I feel she is one of the better players in the region right now. She had a very good tournament,” Teague said.
Mataya Ausmus came alive in the decisive fourth quarter as she hit five of six shots during the Bell run to finish with 16 points. Ashtyn Meyers and Talyah McQueen added 15 and 10 points, respectively, for the 21-4 Lady Cats.
“Ausmus hit some big shots in the fourth quarter and got us going,” Teague said. “We had several girls step up and make big plays.”
Senior guard Jacey Lewis had another huge game for the 10-12 Lady Bears, hitting seven of nine from behind the 3-point line in a 26-point effort. Freshman guard Ella Karst added 11 points.
“Jacey has really stepped up the last few games, including her leadership. She has asserted herself more and is more confident,” Harlan County coach Anthony Nolan said.
“Give Harlan County a lot of credit. They played really well and made a lot of shots tonight,” Teague said. “Lewis shot the ball extremely well, and we struggled to make shots. I kept telling the girls to shoot with confidence and keep playing.”
The difference in the game may have been the 23 HCHS turnovers against Bell’s 2-2-1 press.
“I think If had settled down in the first half, we could have been up eight instead of down five,” Nolan said. “We just didn’t execute. We were very helter-skelter. Once we settled down, we got the shots we wanted. The pressure did wear on us a little bit.”
The Lady Bears had a good night from long distance, hitting 10 of 17 3-pointers, but struggled to convert in the paint and were often hesitant to attack.
“We would get the ball in position, but instead of looking to score we would pass it to someone who didn’t have as good a shot as the one making the pass,” Nolan said. “We were making it too complicated.
“But I can’t fault them. They are coachable and they listen, and I think we’re one of the most improved teams around. We still have another week to improve, and I think we’ll be very competitive in the region. If we can get everyone contributing next week, I think we’ll be a very hard out.”
Harlan County overcame five turnovers in the first quarter to take an 11-10 lead with the help two 3-pointers from Lewis. Johnson had four baskets for Bell.
The Lady Bears turned the ball over eight times in the second quarter as Bell slowly built a lead with the help of three baskets by Johnson. The Lady Cats led by as many as eight points before Lewis, Ella Karst and Jaylin Smith had baskets for HCHS to cut the deficit to 25-21 at halftime.
Kelly Beth Hoskins opened the third quarter with a 3-pointer and Lewis followed with two more to put HCHS up 34-33. Meyers answered with a 3 for Bell. Kylie Jones’ jumper put Harlan County back on top at 38-36 before Meyers tied the game going into the final period with a basket.
Ausmus, McQueen and Meyers sparked Bell in a 16-2 run as as the Lady Cats were up 54-40 with 3:45 left. Karst and Lewis brought the Lady Bears back within six in the final minute, and Lewis’ seventh 3 cut the deficit to 60-55 with three seconds left. Meyers hit four straight free throws in the last 10 seconds to secure the victory.
Both teams advance to the 13th Region Tournament next week at the Corbin Arena.