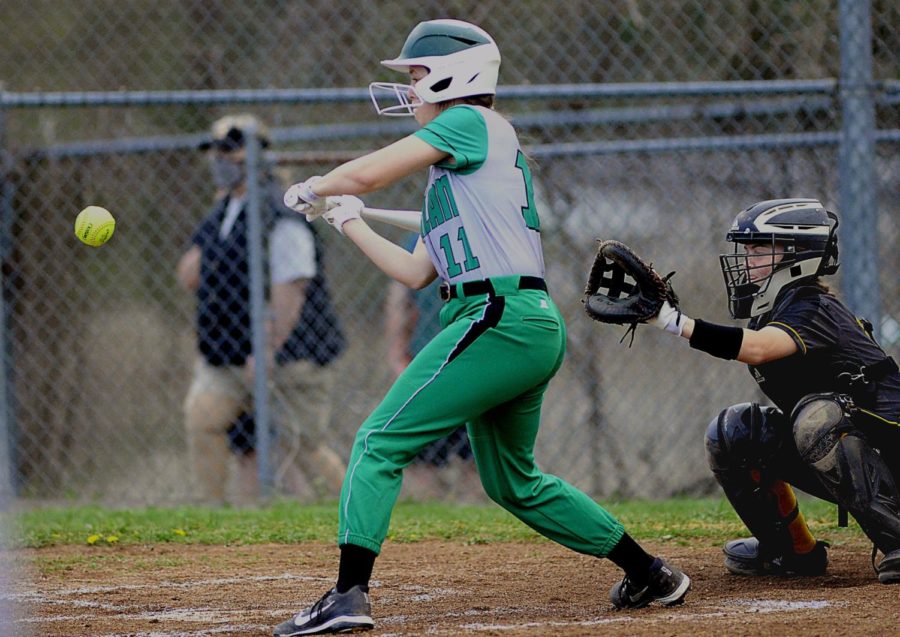 Harlan's Faith Hoskins went after a pitch in Thursday's 13th Region All "A" Classic game against Middlesboro. The Lady Jackets advanced with a 16-0 victory.

It took a second trip through the order, but the Middlesboro Lady Jackets eventually found their timing at the plate on Thursday in the semifinals of the 13th Region All “A” Classic at Harlan.
The Lady Jackets had only two hits in their first look at Harlan starter Mallory McNiel, but then pounded out 10 more in innings three and four on the way to a 16-0 win.
“It took us a while to adjust,” Middlesboro coach Petie Gilbert said. “We kept telling them they had to stay back and wait on it.”
Middlesboro (2-6) was coming off four straight losses in games last week at Cookeville, Tenn., but playing good competition has put the Lady Jackets in position for a trip to the state All “A” Classic. The Lady Jackets will play Lynn Camp or PIneville on Friday in the regional finals.
Mackenzie Miller and Kaylee Lawson teamed on a no-hitter for Middlesboor as Miller fanned eight in three innings and walked none. Lawson walked one in one inning.
“(Miller) wasn’t throwing as many strikes to start the season, but I hope she’s found her groove now,” Gilbert said.
Senior catcher Virginia Marcum, the Lady Jackets’ leadoff hitter, drove in three runs with a double and two singles in four at bats. Lindsey Buis added three singles. Paige Johnson had a double and single. Jamarah Young added a triple. Lawson contributed a double.
Harlan had only three base runners as McNiel and Mckenzie Snelling each reached on errors and Addison Jackson walked.
Middlesboro took a 1-0 lead in the first inning as Marcum doubled and scored on Megan Gent’s ground out.
The Lady Jackets added two runs in the second inning after Johnson led off with a single. One run scored on an error and another scored on a grounder.
Lawson and Ahmad had RBI hits in the third inning as Middlesboro scored eight runs. Marcum had a two-run single and Young ripped a two-run triple to center. J.J. Brown drove in a run with a groundout and Johnson doubled in a run for an 11-0 lead.
The Lady Jackets added five more runs in the fourth inning with the help of two hits, two walks and an error.
Harlan returns to action Friday at home against Cumberland Gap, Tenn.
———
Middleboro 128 5 — 16. 12. 1
Harlan 000 0 — 0. 0. 4
Miller, Lawson (4) and Marcum; McNiel and Jackson. WP — Miller. LP — McNiel (0-1).