McCreary ready to ‘go to work’ as HCHS football coach 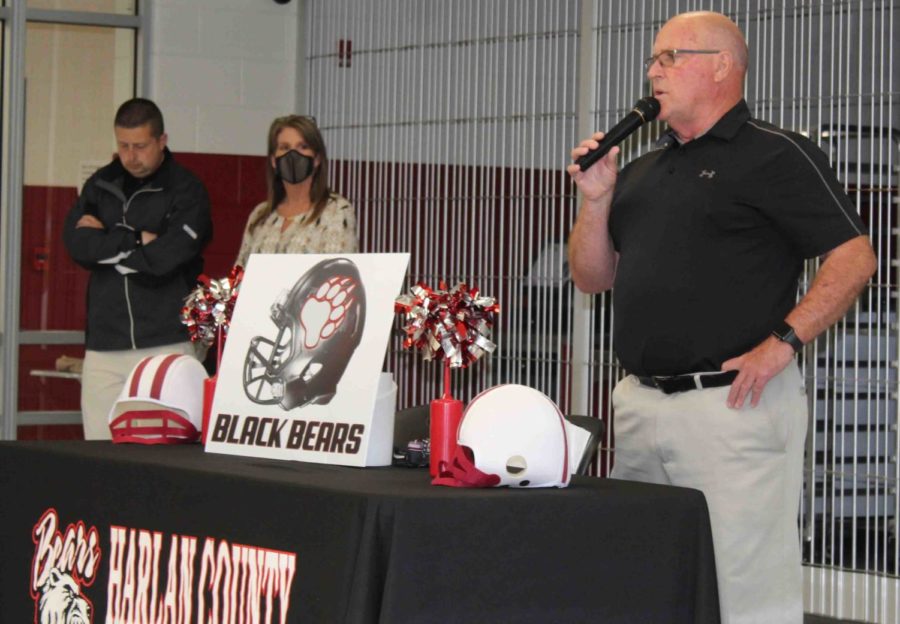 Amos McCreary talked with HCHS players on Tuesday after being introduced as the school's new football coach.

It was a long road back home to Harlan County for Amos McCreary.
An all-state honorable mention linebacker under Charlie Hunter at Evarts High School in 1973, McCreary went on to play at Jacksonville State in Alabama.
He then began a long coaching career, first as an assistant and then at two schools in Georgia where he reportedly coached 100 athletes who went on to sign college scholarships. McCreary was at Creekside High School from 1993 to 2002 and then at Whitewater High School from 2003 to 2015, where he coached a state semifinal squad.
McCreary returned to eastern Kentucky in 2016, leading Bell County to a 4-8 mark in his only season as head coach. He served the past couple of seasons as an assistant at Bell County with Dudley Hilton.
McCreary was at HCHS on Tuesday afternoon and met with approximately 35 returning players in the school cafeteria.
“I’m tickled to death to be here as your new head football coach,” McCreary said. “It feels like I was sitting in the same seats as you yesterday, but when I think about it’s been 47 years.”
McCreary credited his former coach, the legendary Charlie Hunter, with putting the “dream” of playing college football in his mind and encouraging him to put in the work necessary to accomplish that feat. McCreary talked of how he ended up at Jacksonville State playing for former Black Star/Kentucky standout Clarkie Mayfield.
McCreary told the players he had talked to all the HCHS assistant coaches but one and all were excited about remaining on the staff to work with the team this season.
“The conversations I had last night were great. I think their hearts are all in the right place, and it’s about helping these kids. I think that is their biggest motivating factor,” he said.
McCreary told the players in attendance he would be back to school on Wednesday to start workouts.
“Right now we’re behind, but I’m ready to go to work,” said McCreary. “If everybody isn’t pulling together, we won’t succeed.
HCHS athletic director Eugene Farmer introduced McCreary and Principal Kathy Minor presented him with keys to the football offices and pledged her support for the program, as did Harlan County Schools Superintendent Brent Roark, who mentioned a possible expansion of the fieldhouse to improve the weight room.
The HCHS football program began in 2008 and enjoyed immediate success under coach Tom Larkey, posting six straight winning seasons at the start with regional titles in 2010 and 2012 and four straight district championships from 2010 to 2013.
The Bears added another regional title in 2017 under coach Eddie Creech, then won a fifth district championship in 2018. The Bears finished 8-4 in 2019 but fell to 3-6 during last year’s pandemic-shortened season. Creech stepped down in the spring to spend more time with family, ending a six-year run as coach.
The Black Bears will lose a big senior class to graduation and will likely be rebuilding in McCreary’s first season.
McCreary said personnel will dictate the style his teams play.
“My teams have primarily liked to run the ball, but I believe if you have the kids who can throw it and catch you can do a lot of things,” he said.