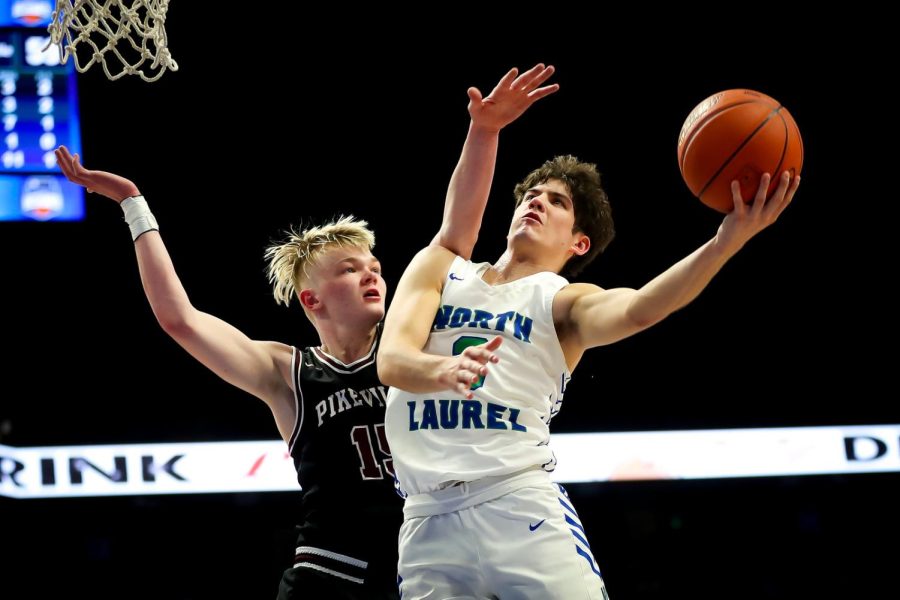 LEXINGTON — After taking a 13-10 lead into the second quarter, Nate Valentine’s North Laurel Jaguars struggled to find the basket, leading to their disappointing, 59-51, first round loss to Pikeville during Wednesday’s UK HealthCare Boys’ Sweet 16.The Jaguars (28-6) were outscored, 34-16, during the second and third quarters, and couldn’t recover even after outscoring Pikeville, 22-15, in the game’s final eight minutes.The Panthers (31-2) used a 18-0 run that began when they were trailing, 13-7, in the first quarter and carried over midway through the second quarter as they built a commanding, 25-13 lead. Nate Valentine’s squad got as close as two points to begin the second half, and six points late in the third quarter before falling.“It wasn’t the outcome that we wanted,” Valentine said. “I feel like it was probably one of the worst games we’ve played all season, and I feel like Pikeville had a lot to do with that. They did a really good job of switching things. They guard one through five, and when you don’t make shots, it makes everything really tough.“Credit to them. They made good plays, and hit shots, and defensively, they were really good,” he added. “They played really well — well enough to win the game, and we didn’t.”North Laurel’s Reed Sheppard struggled offensively throughout the game due to relentless defensive pressure Pikeville applied throughout the contest. He finished 11 points under his scoring average, finishing with 14 points on 5-of-20 shooting while pulling down eight rebounds. He also had five assists, four turnovers, two blocks and six steals.Ryan Davidson led North Laurel with a double-double, finishing with 23 points on 11-of-18 shooting while pulling down 11 rebounds. The Jaguars finished shooting 20-of-55 from he floor, including a 5-of-20 effort from 3-point range. North Laurel was 6-of-10 from the free-throw line, and was out rebounded, 34-33.The Jaguars had trouble defending Pikeville star Rylee Samons, who tossed in 23 points while finishing with eight rebounds. Any time the Panthers needed a basket, Samons delivered. He hit 9-of-16 shot attempts, including a 4-of-12 effort from behind the arc.Nick Robinson finished with 14 points and 11 rebounds while Keian Worrix turned in a 12-point scoring effort while dishing out six assists. He also turned in an impressive defensive effort guarding Sheppard.Pikeville shot 23-of-48 from the floor, including a 7-of-20 shooting effort from 3-point range.  The Panthers were 6-of-11 from the free-throw line.North Laurel jumped out to a 13-7 lead in the first quarter behind free throws from Caden Harris and Ryan Davidson while Clay Sizemore hit a 3-point basket with 1:51 remaining in the first quarter.Pikeville responded by scoring the last three points off the first quarter while scoring the first 15 points of the second quarter as Worrix hit two 3-point baskets during the stretch while Samons added one 3-point basket.Another 3-point basket by Sizemore with 2:11 remaining in the first half triggered a 7-0 run for the Jaguars to end the second quarter, allowing the Jaguars to cut their deficit to 25-20 at halftime.North Laurel opened the third quarter with a 3-point basket by by Brody Brock to pull to within two points at 25-23 before seeing consecutive 3-pointers by Samons trigger a 13-0 run that allowed the Panthers to build a 38-23 advantage with 5:10 left in the third quarter.A basket by Sheppard and two layups by Davidson cut the Jaguars’ deficit to 42-29 at the end of the third quarter.An old-fashioned 3-point play by Sheppard pulled North Laurel to within seven points (49-42) of Pikeville’s lead with 3:15 remaining in regulation. Davidson added consecutive lay-ups and made the score 57-51 with 36 seconds remaining but the Jaguars couldn’t get any closer.2022 UK HealthCare Boys’ Sweet 16Pikeville 59, North Laurel 51Pikeville (59) — Walters 5, Hall 3, Worrix 12, Samons 23, Robinson 14, Jarrell 2.North Laurel (51) — Sheppard 14, Sizemore 6, Brock 3, Davidson 23, Harris 2, Dotson 3.